[easyazon_image align=”right” cloak=”n” height=”500″ identifier=”B07BKSH4KY” locale=”US” src=”https://sousvideideas.com/wp-content/uploads/2019/09/51zzDZvMBbL.jpg” tag=”sousvideidea-20″ width=”500″]After making its debut on Amazon in March of 2018, the Wancle sous vide immersion circulator has quickly racked up over 400 reviews for an overall rating of 4.4 stars.

I will confess that I had not heard of the brand until fairly recently. I stay pretty up on kitchen brands in general and especially companies that make sous vide equipment. But, Wancle? I don’t know, I just have a thing about companies that have a more established track record. But I was able to keep an open mind.

Still, the device came out being kind of underwhelming.

If you would like to know the overall result right up front so you can save some time, suffice it to say that this unit is not necessarily one that I would put on my list of top picks.

One of the best features of this machine is the fairly inexpensive price point.

Here’s our Wancle sous vide review so you can see what all the hype is about with this model. 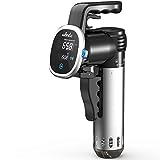 It does hit on some of the key features of the model: it is 850 Watts, it’s known for accuracy, and it’s also one of the quietest sous vide machines you can buy.

In addition, it claims to be able to reach 140 F in only 15 minutes, compared to other units that will take upwards of half an hour to reach that temperature.

Build quality is often cited as one of the standout features of this circulator.

The 850 W machine gives the machine enough power to get the job done.

Some things you should know about the Wancle sous vide machine.

First, this immersion circulator does not have Bluetooth or WiFi capability, which the company literature says allows them to focus on creating an even better sous vide machine. Uh, that seems maybe like kind of a lame excuse in my opinion…?

And this lack of Bluetooth and WiFi may or may not matter to you. I myself am not a big user of smartphone apps related to my sous vide cooking, but that is a pretty important feature to a lot of people. It could be a deal breaker. It makes sense to want smartphone control and I use it myself for certain cooks I’m doing. It’s nice to have the option and buying a machine without this functionality would be something to think about.

If the machine itself was superior to the other options then I could see giving up the Bluetooth/WiFi.

[easyazon_image align=”right” cloak=”n” height=”500″ identifier=”B07BKSH4KY” locale=”US” src=”https://sousvideideas.com/wp-content/uploads/2019/09/51w0s2c8euL.jpg” tag=”sousvideidea-20″ width=”500″]Also, even though the ratings on Amazon right now have a lot of positive reviews, there are also quite a few problems that have been reported.

It’s supposed to be an extremely quiet unit but some have said that is absolutely not the case, based on their experiences. Many people purchase sous vide machines with the promise of quiet operation being a main selling point. So it’s important to note that this machine has an imperfect track record in the noise department.

In addition, a number of customers have reported having trouble after just two or three uses.

[easyazon_image align=”right” cloak=”n” height=”500″ identifier=”B07BKSH4KY” locale=”US” src=”https://sousvideideas.com/wp-content/uploads/2019/09/51ngP5mtOaL.jpg” tag=”sousvideidea-20″ width=”500″]Some have had out-of-the-box trouble with it operating properly. Many times, it has failed on users after only a short period of use. Typical experiences include the machine failing right out of the box, within the first week, or just after the end of the Amazon return window.

Holding or reaching temperature is also an issue in some cases, with some saying it worked great at first and then lost the ability to reach temp after several uses. Another issue that this unit is faulted with is shutting off randomly during a cook.

This would obviously be an awful defect, and to be honest it could be something that you may not even realize is happening if you’re not sitting next to the unit for hours during the cook. Imagine going to get your food out of the water bath at the end of the cook time, only to realize that it was only partially cooked due to the random shut-downs that occurred.

There were also timer malfunctions noted.

Heating water to temp and maintaining the temp while circulating water is all it needs to do, since they decided not even to attempt the smartphone connectivity.

And… they did a really so-so job with his machine. I almost feel bad for them! It’s like, “You had ONE job”…

A rating of 4 stars was given by 14% of customers.

Looking at the positive reviews, I do not get that suspicious feeling that sometimes comes from Amazon reviews these days. That is, it seems like these are legitimate reviews rather than the paid or semi-paid/free merchandise positive reviews that we all hate. Some people mentioned buying it on a lightning deal price, in which case, that’s great — I hope it was a very good price. Update: Looking at the reviews again, I’m not so sure. This is the problem with Amazon sometimes.

Our overall Wancle immersion circulator review: for a screaming lightning deal price, I’d *maybe* be interested in picking up one of these as a starter unit or possibly as a second machine to use for large cooks of multiple foods. Update: I take back what I just said. I really think I’d pass on this one, even if it was a great deal. A unit that quits on you in weeks or randomly shuts off during a cook is not a good deal.

Check it out if you want a very average machine with a spotty track record.

Alternatives to Take a Look At

At this point I would like to refer you to some better options.

One of my go-to machines is always the Anova brand. You could pick up the Anova Culinary Sous Vide Precision Cooker Nano | Bluetooth | 750W | Anova App Included for almost the same price as the Wancle, but you’ll also get the added benefit of Bluetooth connectivity. This Anova unit has a rating of 4.4 stars with about 600 reviews as of this writing. It’s an extremely reliable machine to add to your kitchen.

Another one to look at is the Joule. The Joule is a very sleek, slick little 1100 W immersion circulator that packs a lot of power. It can heat up to 10 gallons of water, giving you lots of space for whatever you may need to cook.

If there’s a drawback to the Joule machine it’s the fact that the unit is controlled exclusively via the smartphone app. Manual control would be a convenient addition, in my opinion, but the quality and performance of the Joule make this minor flaw something I can easily forgive.

The price point is higher but the quality and reliability make it worth the extra expense. You won’t have to replace it in weeks or months due to the sudden onset of serious malfunctions.

You can also take a look at our sous vide machine guide for more options.

I hope this article has helped you decide on whether to get the Wancle circulator. In the past, I’ve recommended the brand, but new information has changed my view of this immersion circulator. Hey you know, it’s always great to be able to admit our mistakes 🙂

Before, the sous vide cooking technique was only popular in expensive restaurants. Now, it’s becoming popular in personal kitchens as well. sous […]

Using an Instant Pot Duo Evo can help you prepare meals in lesser time compared to when doing it the conventional way. […]